In remembrance of those who have passed who contributed much to make our association great. 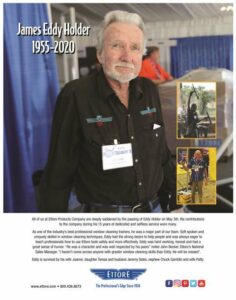 Eddy passed away on May 5th, 2020. His contributions to the Ettore Company during his 15 years of dedicated and selfless service were many. As one of the industry’s best professional window cleaning trainers, he was a major part of our team. Soft spoken and uniquely skilled in window cleaning techniques, Eddy had the strong desire to help people and was always eager to teach professionals how to use Ettore tools safely and more effectively. Eddy was hard working, honest, and had a great sense of humor. ” He was a character and was well respected by his peers” noted John Becker, Ettore’s National Sales Manager. “I haven’t come across anyone with greater window cleaning skills than Eddy. He will be missed”

Jonathan was an innovative man who took great pride in his work, loved his family and friends and brought a wealth of knowledge to the industry. He represented his fellow window cleaning professionals by serving on the IWCA Board of Directors since 2005 and most recently as Secretary of the IWCA in 2010. During his tenure on the board he served on the Membership committee as well as numerous other committees on behalf of the association.

Don had a passion for the window cleaning industry and IWCA. He generously shared that passion with anyone who needed his help and insights. Don and Holly, Don’s wife, have always been great supporters at each of the IWCA Conventions and could always be counted on to pitch in and help the association whenever and wherever needed. Don was always visible each year selling 50/50 tickets at the IWCA Auction that benefited the local Ronald McDonald House.

Jeff was a kind and thoughtful man who was quick to laugh, loved his family and friends and brought a wealth of knowledge to the industry. He represented his fellow window cleaning professionals by serving on the IWCA Board of Directors from 2006-2009. During that time he served on the Glass committee as well as numerous other committees on behalf of the association.

No one can mention Jim Willingham without smiling. Willingham, in his trademark hat, coaching the “youngsters” during convention in the speed contest, his own prowess with the squeegee and his enthusiasm for the “sport” of speed window cleaning have all led the IWCA Board to christen the speed contest the “Jim Willingham Speed Competition.” Willingham, also integral to the founding of the IWCA, was a past president and Lifetime Achievement Award winner and a successful business owner. He lost his battle with cancer in 2008.

The medley contest has been named in honor of Rod Woodward, whose contributions to the window cleaning industry include being one of the founders of American Window Cleaner magazine, inventing the “Super System” at Ettore, and being one of the driving forces behind the IWCA. He was touted as a visionary, an inspiration and a real advocate for the window cleaning community. He lost his battle with kidney disease in 1989.